A lot of players don't realise that the vertical and horizontal scales of miniatures-based wargames are different from each other. The battlefield is highly compressed to allow playing battles on a table while at the same time designers keep model proportions normal. This creates challenges for modelling realistic yet playable terrain 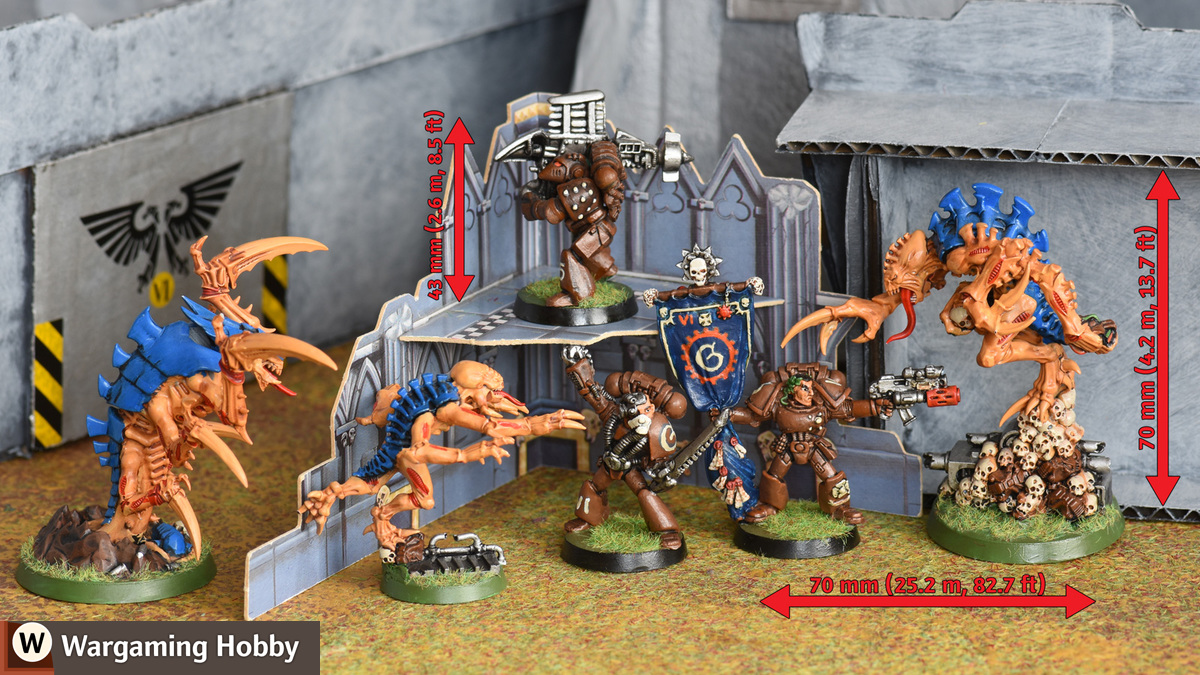 Different scales of the 28mm world

Let’s start from the basics. For a „heroic 28 mm scale” a figure of a strong, well fed man is, well, 28 mm (just over an inch) high. In medieval standards it means that those 28 mm equal roughly 1.7 m. This translates to 1:60 scale for miniatures.

This makes the horizontal scale six times smaller than the vertical one.

On the other hand a typical movement distance of a model is 6” and his effective shooting range somewhere around 24-30”. Modern replicas of English longbows based on the „Mary Rose” specimens manage to shoot up to 360 yards and it is estimated that highly trained longbowmen of old could achieve 400 yards. It is thus safe to take those 30” on the battlefield as 300 yards in the field. This makes the horizontal, terrain scale to be 1:360. A 4x4 ft. (48x48 in.) table represents a rather compact 480x480 yard battlefield (ca. 0.27 miles).

For a comparison the Battle of Gettysburg took place on an area roughly 3.33 by 5.33 miles and the narrow front of the English forces at Agincourt was ca. 750 yards wide. To play the battle of Agincourt in 1:60 scale you would need a table more than 12.5 yards wide!

There are several important consequences of this:

1. The miniatures are tokens, not models and each represents a body of troops

Some wargames, like the Battlesystem, stated this explicitly and provided ways of translating D&D stats of your heroes to this scale. Your warrior was basically 10 times weaker than you expected but he/she was still a force to be reckoned.

You can also imagine the champion to be the whole command group, not just the heroic leader himself.

2. As miniatures are tokens, not models, the concept of a true line of sight is pointless

You can’t check if you see over a model’s shoulder as you should imagine in his place a group of warriors packed shoulder to shoulder in a battle formation. Or a loose pack that does not block the line of sight at all.

3. Monsters must be standing!

Dragons are huge. As huge as a unit of a hundred men. This means a block of 3x3 miniatures, 6x6 cm.

This is why classical monster bases are 5-7 cm long and Citadel dragons of the 1980s where tiny to fit on such a base until someone invented the standing monsters we love today.

This also means the Terrorgheist is actually twice the size of other dragon-like monsters (15x10 cm base).

On the picture below the dragon is the size of some 600 men and the gryphon is either the size of a hundred men or represents a squadron of horse-sized gryphons:

Basically all buildings must be designed six times slenderer than in real life to match the difference between horizontal and vertical scales. Or just used as tokens: one house marks the spot where a village stands.

As for actual floor heights the old Warhammer 40k buildings had 4.3 cm for each level and the new Citadel Sector Imperialis terrain goes for 8 cm. I set my terrain projects at 7 cm which is less exaggerated but still allows easy model placement.

5. Vehicles should be tokens as well

As wheeled or tracked vehicles can’t stand up like monsters do, they are the biggest problem. You can’t make them squished and still not make them extra silly. Actually I haven’t seen a 28mm wargame handle the problem the „realistic” way.

But anyway the bottom line is not to treat the miniatures as models — they are all just tokens.

See the pictures as separate pages: Different scales of the 28mm world 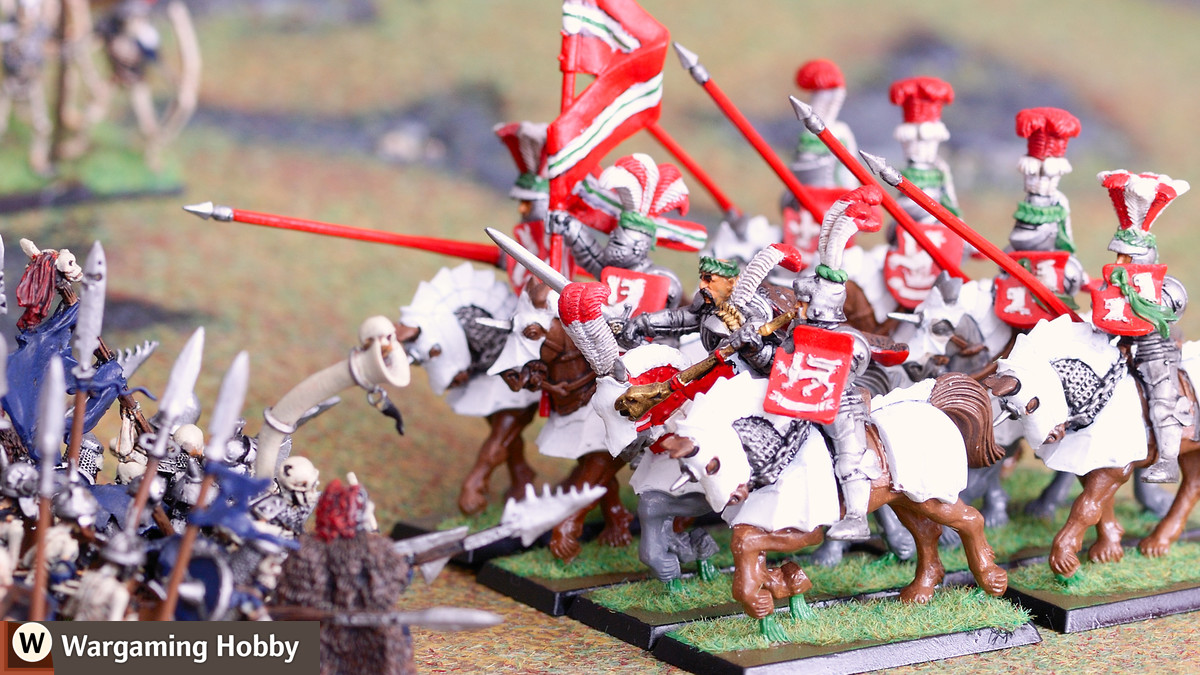 Warhammer is dead, long live the 9th Age
As Games Workshop decided to discontinue the Warhammer Fantasy Battles game the community took it to themselves to create a new ruleset for massive fantasy battles »
News 30-07-2015 Khaiell 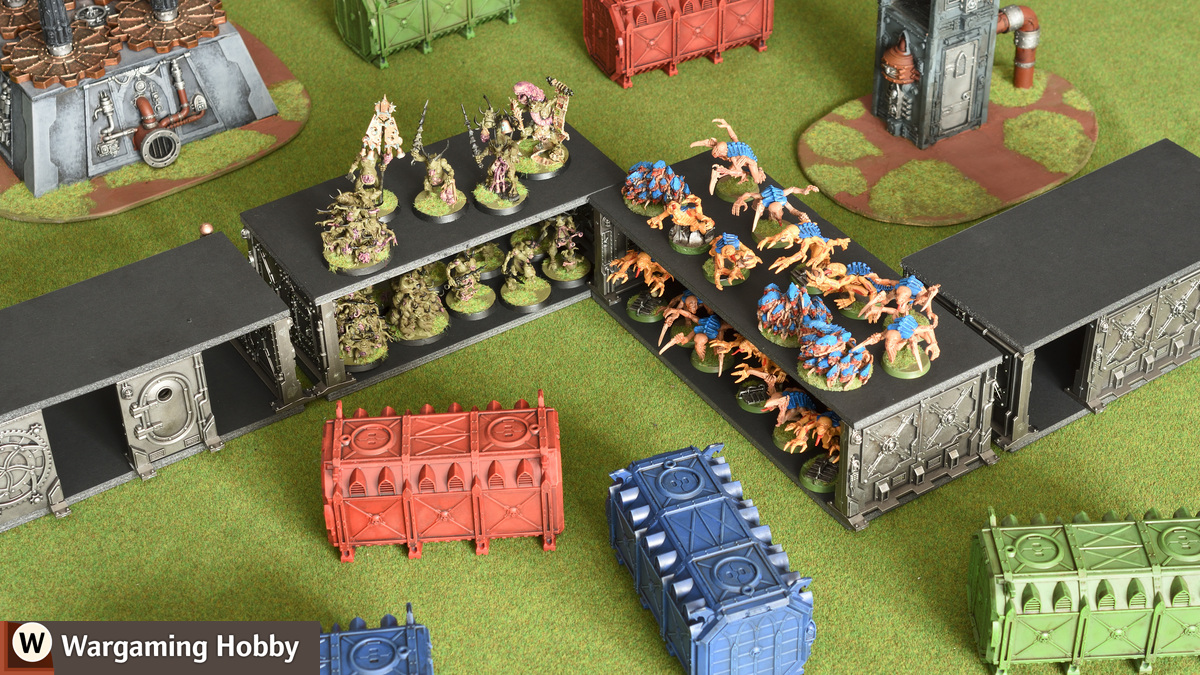 How to double your space for displaying models using Necromunda bulkhead doors
How to build a storage system that doubles as wargaming terrain, using a set of plastic Necromunda Bulkhead Doors and some foamcore. »
How to build terrain 02-09-2018 Khaiell